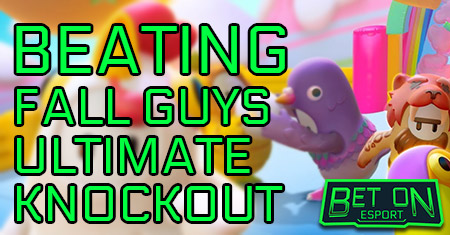 So let’s talk about Fall Guys: Ultimate Knockout and what it actually takes to be crowned champion on one of the latest Battle Royal trends to hit the global Gamers and Esports market! First let’s talk about the game and what this actually consists of both positive and negative. The game is based on a bean-like slightly badly balanced or drunken character rushing through some fantastically designed levels in composition with up to fifty nine badly dressed other bean type characters. Fall Guys: Ultimate Knowledge is a great take on the massively growing Battle Royale series of games taking the internet by storm. It has super great colourful animations with both a good sense of humour and customisation. You can play the game to compete or simply spend your time ruining the competition but what does this mean. An amazing feature in the game is the ability to ruin someone’s day and I mean ruin it, the fact that the game consists of multiple qualifying rounds before getting to the final round in the hope to be crowned champion gives players ample time to get abused by other players and as stated above ruin someone’s day! Fall Guys: Ultimate Knockout has a unique feature allowing players to hold onto each other or simply block someone’s path, the game appears to be built on a kind of balance chart and noticeable see players fall over when bouncing against other players for so long. This feature however does some into massive effect when in larger crowds and trying to squeeze 60 players through a narrow door often ending up with most of the characters rolling around the floor and only a handful of Fall Guys making it through unscathed.

The game itself is super enjoyable with each event lasting round twenty plus minutes made up of what feels like between five and six different rounds. Sometimes this does get shortened having played one game where the third event was a final sprint for a crown which I inevitably lost. Either way the game is great with a multitude of levels to no choice but get randomly placed into however with one annoying issue here many of the chosen levels seem to repeat with having in twenty plus games played never having played a couple of what look like the advertised levels, this gives a feel of either a glitch or simply certain levels being selected over others more often due to some kind of compatibility issue, either way one of the minor drawbacks that could make fall Guys a better game.

Going back to the gameplay however the game is fun and cute with many of the characters being heavily customized to the players choice with some great and quirky costumes to choose from all of which are competing for that final crown. The characters though well designed do feel like there are many uncertainties when performing multiple actions as simple as running and jumping with the most uncertain action being the grab function. On Fall Guys: Ultimate knockout the grab function seems to work quite well when grabbing other players however much less so when using the function to reach for a ledge which is often required in multiple levels of the game. Very often resulting in the bean character hitting their head against the said ledge falling over and beginning the exercise all over again, this can get frustration on certainly levels which require you to climb over said ledge to qualify and do occur on later rounds which means you have likely managed to qualify three to four rounds prior to attempting this level. With that said, its possible that this clumsy sort of feel to your character may well be an intended part of the games feel. In any case the game is great and though has some small issues is still quite enjoyable. The question however remains how long with Fall Guys: Ultimate Knockout remain trending against the longer lasting Battle Royals like Fortnite, Call of Duty, PUBG and many others. I think the unique selling point or USP comes in the form of player blocking as stated above, the fact you can hold onto someone and obstruct them completing the level or falling down a ledge to end their entire game makes Fall Guys quite unique, its utterly unforgiving and can lead to some serious frustration and will give the game some longer shelf life! But will it be enough to make it into the Esports realm. It is here where the shelf life will really mean something as many games that want to stay relevant and get all the long term updates and changes they need to create a cult following do depend on becoming mainstream in the Esports realm. Looking at Past successes like CS GO, Dota 2, League of Legends, Fortnite and numerous other more mainstream games like those produced by the hated EA Sports games do need to make it into the competitive realm to remain relevant for longer but does Fall Guys: Ultimate Knockout have what it takes to do so.

The game itself is simple with only 4 actions available to the player, run, jump, dive and grab, a simple mixture of the most basic game mechanics going back to the days of Super Mario Brothers and Sonic the Hedgehog. Though its in the physics and design where this game excels, the fact you have limited control of your character and he will fall over in the slightest known with other players or level objects make the game more about skill and avoidance of trouble. It’s here where the game can become more about timing and thinking ahead that purely button mashing and players have become better at it. I believe it’s now up the the developers to start creating levels that are more relevant to the Esports Battle Royal world that are less likely tampered with and in many cases affected by the action of other players. Maybe it would be wise to have certain levels for competition and others for fun play!

The verdict however is Fall Guys: Ultimate Knockout is a great casual game and could easily be a feature in the future of competitive battle royals!