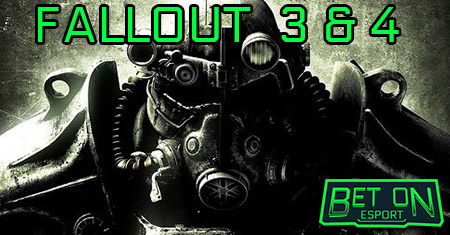 Let’s talk about Fallout and not all the Fallouts but just the ones I have played. Not going to pretend to be one of those die hard fallout fans going back to the original Fallout one and Fallout two games that trying to play today makes me feel like i’m regressing into my microgenius days when I recently tried to play them but more so about the Fallout of today and in all fair that pretty much for me refer to two of the 5 games which includes new vegas.

I have to say I’m a big Fallout fan or a huge Fallout three and Fallout four fan as those are pretty much the only two games I have played. I did actually try to play Fallout New Vegas once and I completely get that the internet seems to absolutely adore the game however at the time was looking for something newer than an extension of Fallout three which is what it felt like at the time, but in saying that I am certainly ready to go back and give this game another try, as soon as i am done from my eight play through of fallout four.

First I want to start with Fallout three and what this game did for me, it not only boosted a huge interactive world where my looting and hoarding obsession truly began to shine and explore how much I loved the idea of endless loot but had a fantastic pace to itself. Unlike many other role playing games or more so western role playing games of its time the game had some very exciting new mechanics and existed in a fantastic parallel world based on nineteen fifties culture mixed with some mad love for radioactive goods the idea is really a spin of to what the world could have become should some major microchips not have made their way onto the product lines which is in fact what created this spin off in events ultimately leading to the fallout universe, but getting back to the games, fallout three was for me a masterpiece, a decent storyline with endless side quests, incredibly fiery findings to be had all over the mad and as stated above endless loot. This was paradise at the time but going back to the game now I can in comparison see where the game lacks over some of the more diverse smaller games of its time. Did Fallout three sacrifice depth for a giant sometimes frustratingly glitched map and endless loot for the quality and graphics of other games of its generation.

To some extent I suppose it did, but ultimately it worked and it suited what today has become an incredible franchise.  Players today still joke about what a Bethesda office plant should look like and how glitchy and buggy graphics, levels and more are just part of the fallout experience, when you make something so big you are going to have to cut a few corners and Bethesda did that well! Going into Fallout three as a game this was an amazing experience with so many things to find and do, strange characters and areas of the map which had some very controversial stories to tell but nonetheless made the series its quirky and dark theme it is today. Fall out three was based on a huge post nuclear apocalypse version of Washington District of Columbia and boosted some fantastic post nineteen sixties memorials that any tourist would have to visit along with some amazing means of transporting yourself around this city through broken subways which for me was part of the fun. I never really got the subway map nor understood how it could be so difficult to arrive at my intended destination but eventually did, though in the back of my mind I still feel there are multiple areas of the game I haven’t visited and will certainly be returning to that adventure quite soon! The game was great and I always wondered how other people played it, the idea of some people playing this game with particular rules to make it near impossible to complete was fascinating and did watch a good number seeing people finish the game without killing anyone or simply never getting hit, the Bethesda series was quickly creating a sub culture along with the endless amount of complaints and jokes about what I take to become a developer at Bethesda. Moving on the Fallout four, a game I am in fact still playing as I write this piece, one of my all time favorites not particularly because of the story of even the map as I can say Boston was the best choice for the latest entry to the series. The game is itself just super great to play.

The Menu is fantastic with a lot of customization even at the ending level which I figure can be comfortably completed at around level fifty the game feels like there are more than half unused or discovered abilities and at least sixty percent of the map to still explore. The guns customization alone added hours of looting just to reach higher levels of damage and without the skills to match you never quite feel how powerful a simple handgun can be. On all my playthroughs to date i stuck with handguns as it seemed easier to level initially and complemented the loot obtained in the earlier part of the game however as the game progresses it becomes more fun and valuable to put loot into the commando perk to better deal damage for rifle or two handed type weapons. The game is great and though not a Battle Royal or having any online play whatsoever still has amazing replay value. I know there are some competitions in the internet subculture of insanely difficult troll playing of the game and not sure whether this would ever relate to a betting on Esports market however is still one of my favorite series to date. I will certainly put something down on new Vegas once I finally get a good play through on that but one question remains, with Bethesda releasing so many versions of Skyrim how is it possible that no Fallout series has ever had a remake or remastered version? Maybe it’s about time!