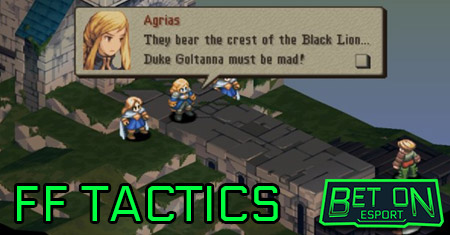 So I want to talk about one of my earliest proper gaming obsessions, final fantasy tactics. Now this game though pretty much under the radar was for me on of the best made games in the final fantasy series having an incredibly interesting element which made the game so replayable I must have gone through it a good five to six times and for me that’s a lot as I often restart a game but never quite end up playing fully through a game more than once or at best twice Elder Scrolls 5 Skyrim included in that!

What made the game so great:

So I am going off memory here though even though I am due for a Final Fantasy Tactics play through quite soon I can say it all came down to one key element which was the job system. The ability in Final Fantasy Tactics to change jobs to what was around twenty jobs in total for the player to choose from, the jobs however would come as a surprise in the early days of final fantasy tactics given this game came out in 1997 and many gamers back they or gamers just getting into this game didn’t have anything more than a very basic dial up connection if that with extremely few sites to visit on how to unlock the other jobs, you simply had to play through each job till you unlocked the next as the job unlocking system was based on the level of each role, I recall a certain level squire allowing you to open up knight and from then you needed a combination of job levels to unlock certain jobs. I remember very often running for a lancer playthrough as this was certainly one of my favorites jobs to play with given the ignore height ability and also the ability to jump and disappear from screen for a while which also meant you wouldn’t get attacked. There were tons of jobs to enjoy and made the game hugely popular for multiple play thoughts as you would certainly try another path on the next attempt.

More than just a Job!

The great thing about the game wasn’t just the job system and how that interacted with the world but the battle world itself as save for a hand full of cut scenes the game was played on what looked like an old pirate map, the character would follow set lines and run the risk of getting into battle when passing through forests, plains, swamps and mountains areas, in some cases I also remember a volcano. The environment made a huge difference to the world meaning your safest bet was plains as the most obstacles would be rocks you can’t pass around but when trying to get through a swamp you would be huge slowed when entering the actual bog or either weakened by the result of being in lava etc, in some cases if the water was too deep you could not be able to play through your turn and could result in a huge disadvantage which made choosing your team for a said battle extremely important. As mentioned earlier lancers where a huge key given they could jump over large items and scale huge walls while some characters could fly or teleports, even having items allowing for float would make a large difference to a battle outcome. The maps were simple square based battle grounds but have a huge effect on the game and still today get excited at the very simplified chocobo riding intro which made final fantasy one of my all time favorite role playing games.

The fights in Final Fantasy Tactics where key and stuck very close to the name, Tactics, it was just that as battles made up 90% of the playable game which a small portion going to team preparation and shop adventuring to find either some basic chemist wielding items or those that can be used as a squire however the game was punishing as you had to learn the ability to use an item to be able to actually make use of the items you have bought in a battle. There were huge decisions to make and each character had a very unique playing style. The main concept of the battles was the turn based system but Final Fantasy Tactics took this a step further with turn based being heavily inner team also, increasing your haste or speed would allow one character to have mu;tiple turns and if buffed enough could have a huge impact of a battle. The game makes a big point here to invest in this as even if you had a very strong build but that characters were blinded or silenced would have a huge impact on the battle. The game even took it step further as when a character died in Battle a timer will start and should that timer run out the character would be gone forever. The player had to take advantage of every battle and when a human opponent fell and the timer ran out it would be a race to pick up his life rytal which would heal the characters but in the early days also teach them an unknown ability, your couldn’t simply restart a battle so planning both movement and which character would collect that life stone or essence did actually have an affect especially if you wanted to quickly buff your team to take on higher level areas more so than opponents. The game however did scale and over time even the simple plains where you first encountered level one creatures could soon turn into a very painful battle and I believe it is this element that gave final fantasy tactics its huge replay value.

What I also loved about final fantasy tactics was a nice couple of hidden easter eggs and items that could really impact the play of the game. Final Fantasy Tactics emerged exactly one year after final fantasy 7 and with that the game creators decided to give Cloud Strife an appearance in Final Fantasy Tactics, can’t remember the whole process but the player had to follow a number of small guidelines to make this guy appear and eventually have him run off to chase him down, there were a couple of these small features and back than a hidden easter egg of this nature was a big thing and made fans of the previously released final fantasy 7 quite happy. The game also had a couple other elements which I am not sure where left there or purpose or simply found later in the game, for one the most powerful sword in the game which if I recall also hastened the players like most items could be duplicated with a little playstation one wizardry. I recall having to place the items in one hand and then buy all to have the item duplicate but will certainly look that up on my next play through. There was also a hidden Dungeon on the game which allowed players if I recall to descend a certain amount of levels in hell and these battles were seriously tough!

The Betting or Esport Element

What always struck me about the game was the tactics system was great and could always be used outside of the game itself, it was very much like a game of Chess and Final Fantasy Tactics strived to stand out as a very different game to many releases happening in the same years as Tactics. I can really see this being used for Esports Tournaments as it took the player a lot of thought on how to approach a battle, some elements will need to change as in the event you do end up on PvP (Player versus Player) there needs to be a balance out with point in starting first versus the damage you deal, who knows maybe one day someone will pick up this engine and make a great Final Fantasy Tactics meets League of Legends Teamfight Tactics.