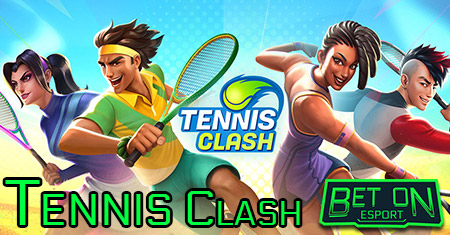 Tennis Clash the mobile highly competitive Tennis that makes you want to smash your phone on more than one occasion and whether such games will ever make it to the world of betting on Esports!

Been playing tennis clash for a fews weeks now and all in the all the game is great, well designed and extremely responsive for a mobile game however having played this on a Samsung S10 I can’t tell whether it performs as well on other devices which may not have the processing power of the Samsung s10.

On first glance the game as mentioned is clean and looks like your average pay to win mobile sports game however does have a bit more to it than the likes of the many golfing versions of similar pay to win games. The games smooth with many variations and upgrades of the main characters and has even applied a halloween update for October. There are other functions and features which do make this game unique like the training feature which ultimately creates a new source of drop bags or boxes for the player to collect, the issue which this is the game allows you to play one round for free then charges you if you wish to try again, this is a good methods to get players to continually pay to simply beat their own high scores and maybe get a coupe of drop boxes or bags in the meantime.

Work has gone into this game but I believe it fails where many other mobile pay to win games do also, if you really want to play the game you have to pay for it, which I think works against many mobile game providers as players don’t have the chance to get into the game and become competitive enough to allow these games to go into potential competitions. To be fair I am not even sure how an Esports tournament would look on a mobile game like tennis clash as I believe the device whether it be an iphone or samsung could greatly affect the ability of a player to perform at the highest level and when adding elements like entry fees or prize money it could easily be a deal breaker, however looking at the game itself I believe these types of mobile competitive games do have potential and could one day enter the global esports competitions with some serious prize money to be had. That being said, I think the pay to win features need to be worked on or atlast have a function when playing competitive games, players have to start from the same level and use the same stats. The issue with the current model is that when you want to play Tennis Clash you need to pretty much either wait to have enough coins to play the game, this happens by clicking on the drop bags that may or may not give you enough to play a single round, you can choose to watch some adds allowing the game makers to rack in some income however this function often appears glitched and even after watching the ads to gain a few coins on Tennis clash you are not rewarded with the said coins. Or alternatively you can pay to not only continue playing but buy better stats, equipment and more, the process is pretty circular as even though you pay for the coins to play and open some bags, you still need to play to continue feeding those drop boxes or bags in the case of Tennis clash.

All in the all the game is good but again don’t believe the pay and play market for mobile games are ready to hit the big leagues, who knows this might change, many mobile games developers are changing their strategies as with so many pay to win mobile games in the market today there is very little that divides the droves of tennis, gold, football and other mainstream sports games that take online mobile game competitions to a new level.

Looking at the future of mobile gaming and the mobile industry in general, new models are smoother and with larger screens and super enhanced clarity games are getting better, it’s only a matter of time till mobile producers again try to create the optimal mobile gaming version as Nokia once did with the Ngage!