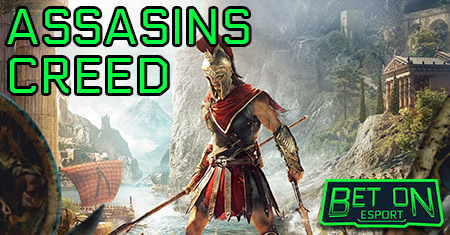 So after many years of thinking about it I finally picked up an assassins creed title having never played the games before. I had seen a number of playthroughs and maybe held the Playstation remote and wondered about the game a couple of times years ago just to get the feel of the game while watching other people play however never really played.  On first impressions the game does great, Assassin’s Creed Odyssey is a fantastic looking game with a giant map to go with along with some amazing views to be had and my initial thought is just that, this game has a lot to see and do. The game itself does put you into the world quite slowly, with first instance being the smaller island of Kefalonia before venturing into the larger Greek map and its done very well. The player initially does feel like a small fish in a large pool which adds to the grandiosity of role playing games in this case an action role playing game with some very quick elements making it quite unique. The game itself plays smoothly with great speed and fantastic graphics but does lack a little depth when getting into the games mechanics, its ultimately a hack and slash but a good one with some great places to see and characters to meet. The story as I could pick up does revolve around the standardized assassin’s backdrop playing into the interlinking Greek mythology and history. The idea behind the game is good but I can’t help but feel the game could have been much more with a potential base system or maybe more with the ship features which we will go into later.

All in all it was fun playing the game and took me around 40+ hours to get through everything I felt was enough to put it down, in all fairness I did not hundred percent the game and been thinking about whether I will find the willpower to do so ever since putting it down around three months ago, not sure i’ll get to it, maybe on a quiet winter day when i’ve gotten through the massive lineup of games to play and review this winter! The game does have some fun and unique elements including the building or more so redesigning of your ship and the addition of captains which do make quite an effect on your ships ability to sail the greek seas and battle some great looking pirate or cult captained ships. The issue however is the hiring of captions does become a little tedious and often results in having a lot of profiles to clear out as they simply do not match up to your current crew. The biggest issue I find with these systems is it greatly reminds the player you are playing a video game whereas some other role playing games do their utmost to get the player to forget this and dive incredibly deep into the game’s mechanics and storyline. The multitude of captains available and the ease of hiring or simply knocking out nearly every enemy in the game in the hope they have a legendary status and adds something to the crew quickly becomes monotonous and has the player thinking crap i need to go into the inventory screen and clean out all these useless characters! This could have been avoided by simply making it much harder to recruit and interact with every single enemy in the game this way, maybe some characters would be marked as more likely to waiver from their current allegiance and not simply being hit by one knockdown arrow and now agreeing to leave their life long commitment to the spartan or Athenian army to join a ragged band of sailors out to save the Greek world from a hidden cult. Though I get it these dynamics make the game simple enough to be played as a hack and slash but not to those players looking for something a bit deeper. I believe the games have huge potential and am very much looking forward to giving a go to Assassins Creed Valhalla, however I have not yet decided whether I will be able to go back in time and try previous games. Maybe if Todd Howard took over Ubisoft we could look forward to the next twenty years of releasing the same games but cant see Ubisoft killing their creative team in that way!

Nevertheless the game is definitely worth giving a try and the map has tons to see and so, some of it though feel repetitive does fill the need for adventuring any sandbox game enthusiast needs from time to time. Looking at other options and future for the series not sure whether they will make it into the esports realm as the way battles are played out make it a tough one for combat or open world combat like what was introduced to grand theft auto and other rockstar games like red dead redemption but may be able to play out on the out of the ordinary series like speed runs. The game does have a couple of racing elements on horseback though these are very limited given the simplicity of the controller mechanics. One option for esports could be the ships battle system as this is actually quite fun however more so when playing a hack and slash role playing game and many other games where ship battles reign supreme like Empire Total War or one of the many fantastic Pirate Ship type series Assassins Creed Odyssey Ship elements wouldn’t unfortunately stand a chance again those heavy weights in the series.

Once I have put a good few weeks into Assassins Creed Valhalla I will be back with a more detailed comparison of the two and how the new games have grown on the elements of Assassin’s Creed Odyssey.